I absolutely love books!  I have floor to ceiling, wall-to-wall bookcases in my “spare” room and they are overflowing. My solution:  get more book & build more shelves! So I was completely stoked to get to review 3 books from Carole P. Roman & the Carole P. Roman books and collections for the boys!  They are Captain No Beard, An Imaginary Tale of a Pirate’s Life, Pepper Parrot’s Problem with Patience, and The Treasure of Snake Island.  These are all from the series of Captain No Beard which contains 10 books all together.

Of course what adventure loving boy wouldn’t get excited about pirates?  We just happened to get these in the mail during a flood in our area. So, it was perfect!  It was cold and rainy outside and everyone snuggled up together on the couch to listen to our new books.  And let me tell you, they were a hit right from the start!

Captain No Beard, An Imaginary Tale of Pirate’s Life was what we started off with and we were all hooked.  We traveled with Captain No Beard (my son thought that was hilarious about the no beard) on an adventure on the high seas along with his trusty first mate, Hallie, Linus the Lion, Fribbet the Frog, Mongo the Monkey and his ship (also known as his bed).  We learned that being responsible for a whole crew is hard work!  Captain No Beard can get a little discouraged by that at times but he’s a true captain and perseveres anyway. 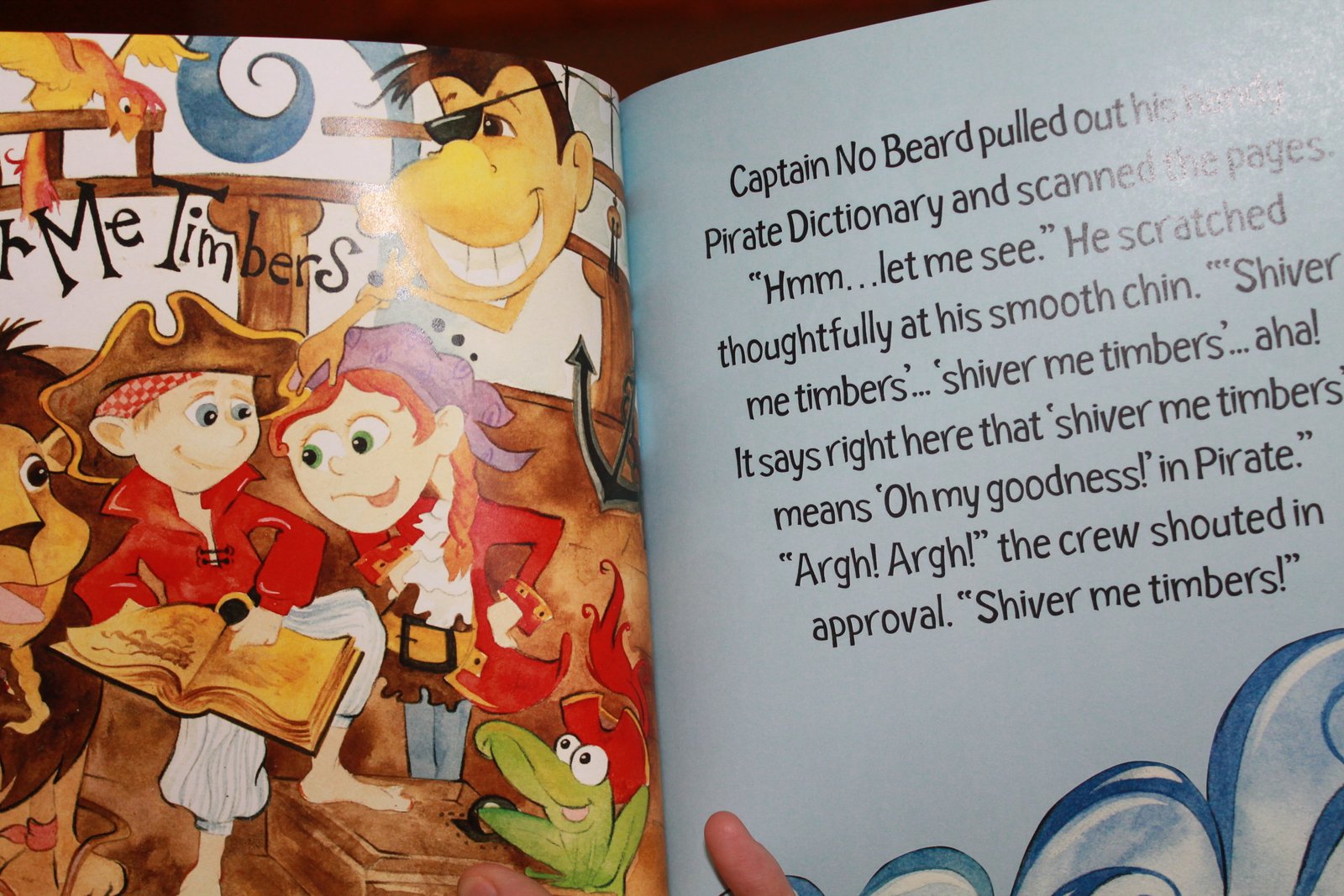 Next, we read Pepper Parrot’s Problem with Patience. (say that 5 times real fast).  We again joined Captain No Beard, Hallie, Linus, Fribbet & Mongo on an adventure.  But this time we had a newcomer named Pepper Parrot.  Poor Pepper has a real temper problem and can’t seem to do anything right.  But her new friends won’t give up on her and work until they help her find solutions to her problems!  Never underestimate the power of good friends!

Lastly, we read The Treasure of Snake Island.  Ooh, doesn’t the title send shiver up and down me spine!  Ok, so it would if the front cover wasn’t so delightful!  We once again set out with our crew and stallart captain, Captain No Beard.  We also have new friend along on this journey, his baby sister!  We’re going to have to travel to a desert island and find a hidden treasure.  However, there’s just one catch:  its inhabited by snakes and Hallie is deathly afraid of snakes!  She doesn’t let that fear stop her though and they find a true treasure in the sand.  A treasure that will fill their hearts and minds with adventure, knowledge and wonder!

I actually bribed my boys with these book they loved them so much.  As a reward for reading, I’ll continue to buy them the remaining books in the series.  I had never read any of Carole P. Roman’s books before and was very impressed with the content and the artwork.  I will definitely be buying more!  She also has several other series, including a cultural series, historical series and a bedtime series.  Honestly, they all look really neat!

I hope you’ll check them out and see if your adventure loving kids love them as much as mine did!  Also, check out the other reviews linked below!