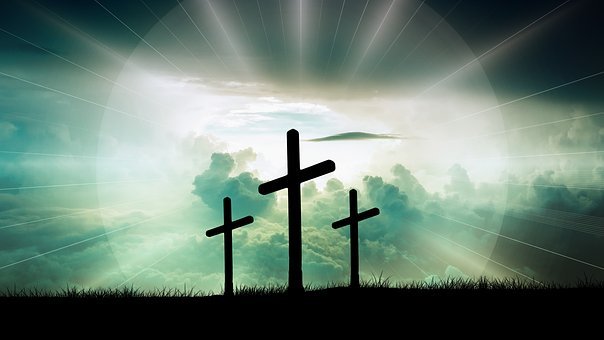 In our day it seems as though Christmas gets our main focus and Easter is just a side note.  But I’m seriously rethinking that.  After all, just consider what would be if Jesus has come to Earth as a little baby, lived, died and that’s the end of the story…Where’s the hope in that?  As Paul said, “we would be of all men, most miserable, if our hope is only in this life.”  But thankfully, that is not, the end of the story!

As the main focus of our homeschooling is centered completely around God, his law, Word & His Son, Jesus Christ we are exploring exactly what Easter means to us as Christians.  I’m going into the whole meaning of Jesus’s death, burial and resurrection.  And it constantly amazes me at how insightful young ones are!  Jakob can ask and answer some of the deepest questions 🙂

Now, I don’t pretend to know all the significance of the events leading up to Jesus’s death, but the things I do know make me really excited to learn more!  I find it incredibly significant that Jesus (our perfect Lamb) was sacrificed for our sins during Passover.  So, as the Jewish people were told to paint their doorposts in Egypt to prevent the Death Angel from visiting them, we are told to let Jesus cover our sins with His blood.

I want my children to get excited about Easter!  But not because of chocolate bunnies and Easter egg hunts.  There is nothing inherently wrong with those things (other than too much sugar 😉 ) but I really don’t want them to connect Jesus’s death and resurrection with an egg hunt.  Why?  Because it cheapens the sacrifice He gave.  Its kind of like, ok, let’s read the Easter story and then lets get to the really good part!  The Egg Hunt!!  Let’s teach our children to push past other kids in search of the most eggs, the most chocolate all in honor of our Lord’s resurrection.  It doesn’t really fit together, does it?

So, my goal for this year is to truly educate my children about Easter, its meaning and where we would be without it.  I want them to yearn to dig deeper, to have more than a superficial faith as they mature.  I don’t want them to be content to just go along with the culture (even church culture).  Yes, I want them to have fun, but as the Bible says “there is a time for laughter, a time for mourning.”  I want them to genuinely mourn the horrific death of our Savior (which can’t be wrapped in a nice package).  It says it was difficult to tell that he was even a man after the beatings, the plucking out of his beard…That doesn’t sound like its connected in any way to eggs filled with money.  Then I want them to truly rejoice when he rises from the dead!  I want them to feel the joy that those men and women felt when they saw Him alive again!  I don’t want it minimized or sanitized because they are children.  I want it to sink deeply into their hearts and impact them for eternity!

Do I think you’re wrong for doing egg hunt?  No.  That is entirely between you and God.  This is just about me, my family and the choices we make.  So, tell me, what are your thoughts?